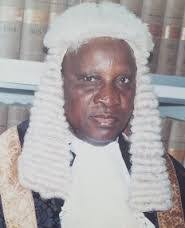 His Royal Highness, Alhaji (Dr.) Ibrahim Sulu Gambari, CFR, the Emir of Ilorin has appointed a former Chief Justice of Nigeria, Hon. Justice Salihu Modibbo Alfa Belgore, GCON, as the Chairman, Board of Trustees of the Ilorin Central Juma’at Mosque.

The Board of Trustees is the Highest decision making body of the mosque responsible to the Emir who is the President and Custodian in the general management and maintenance of the world class edifice, which came to being immediately after the Commissioning of the expanded, rehabilitated and renovated Ilorin Central Juma’at Mosque.

“Hon. Justice Belgore, GCON played a prominent role and donated generously to the mosque construction project and has been a committed member of the Board of Trustees since inception, also serving as the Chairman of its Subcommittee on Investment”, a statement by the Ilorin Central Mosque’s BoT Secretary and Danmadami of Ilorin, Alhaji Shehu Abdul Gafar, OON said.

“The 84 year old jurist holds the traditional title of Wanbai of Ilorin and is a member of the Nigeria Bar Association (NBA), International Bar Association (IBA), Nigeria Body of Benchers and Overseas Master of the Bench, Honourable Society of the Inner Temple and was Chief Justice of Nigeria between 2006 and 2007.”

He replaces the Pioneer Grand Khadi of Ilorin, Hon. Justice Abdulkadir Orire, CON, Marafa and Sarikin Malami of Ilorin, the erstwhile Chairman of the Board who died on 26th January, 2021.