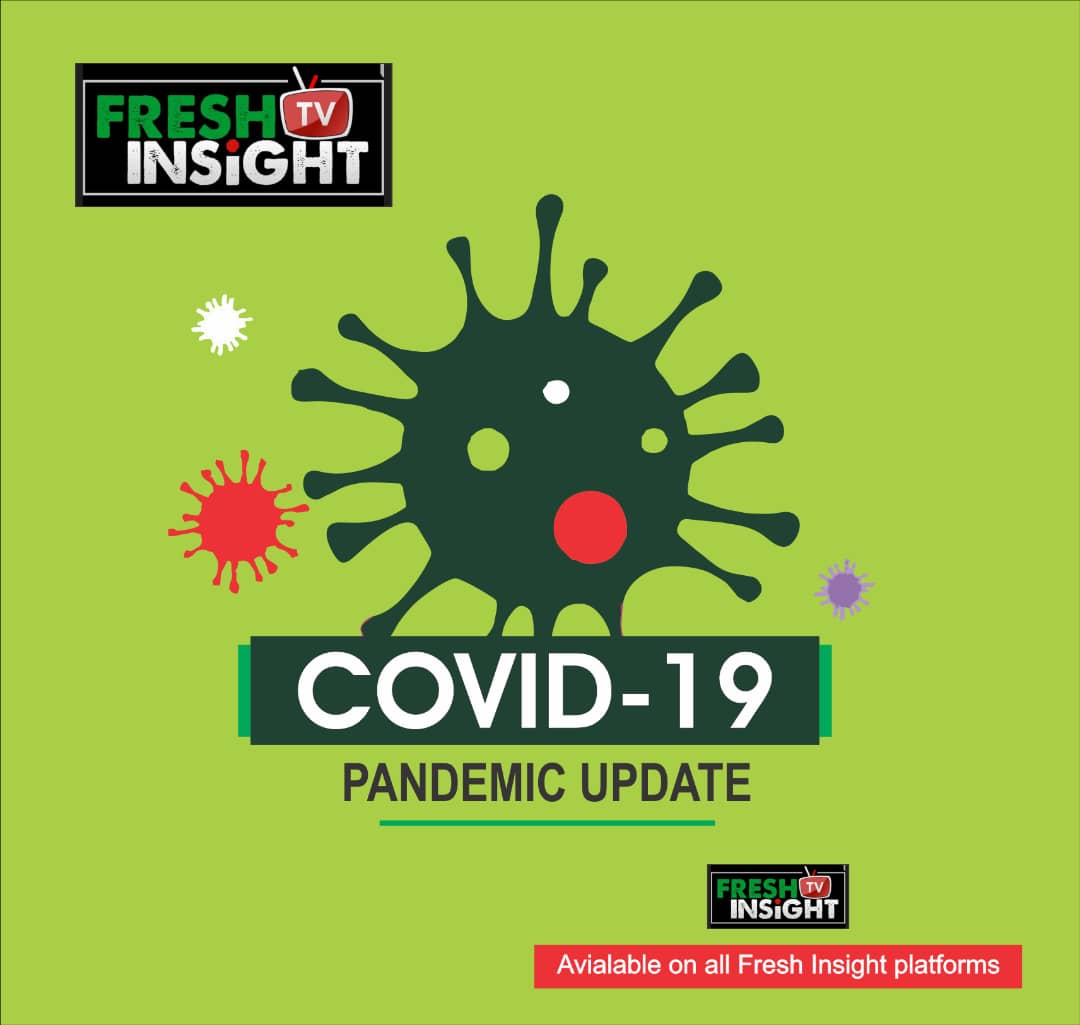 By Abdulrasheed Akogun
No fewer than 204 residents of Ilorin has so far been infected with the novel covid 19 pandemic, Fresh Insight has gathered.
This much was contained in the statistics released by a non governmental organisation ‘know covid 19Nigeria’ which is the brain child of young Nigerians, set up with the aim of tackling and reducing the spread of fake news as related to covid 19 pandemic in the Country.
According to the statistics, a total of 205 people have so far contracted the disease in the Kwara Central Senatorial district of the State with Ilorin West coming tops with 101 confirmed cases, followed by Ilorin South with 73 positive cases and Ilorin East with 30 confirmed cases, while Asa which is a rural local government under the district have so far recorded just one confirmed incident.
In the same vein, Kwara South Senatorial district have so far recorded 12 confirmed cases with Ifelodun and Offa local governments having 5 positive cases each and Oke-ero with 2 confirmed incidents. 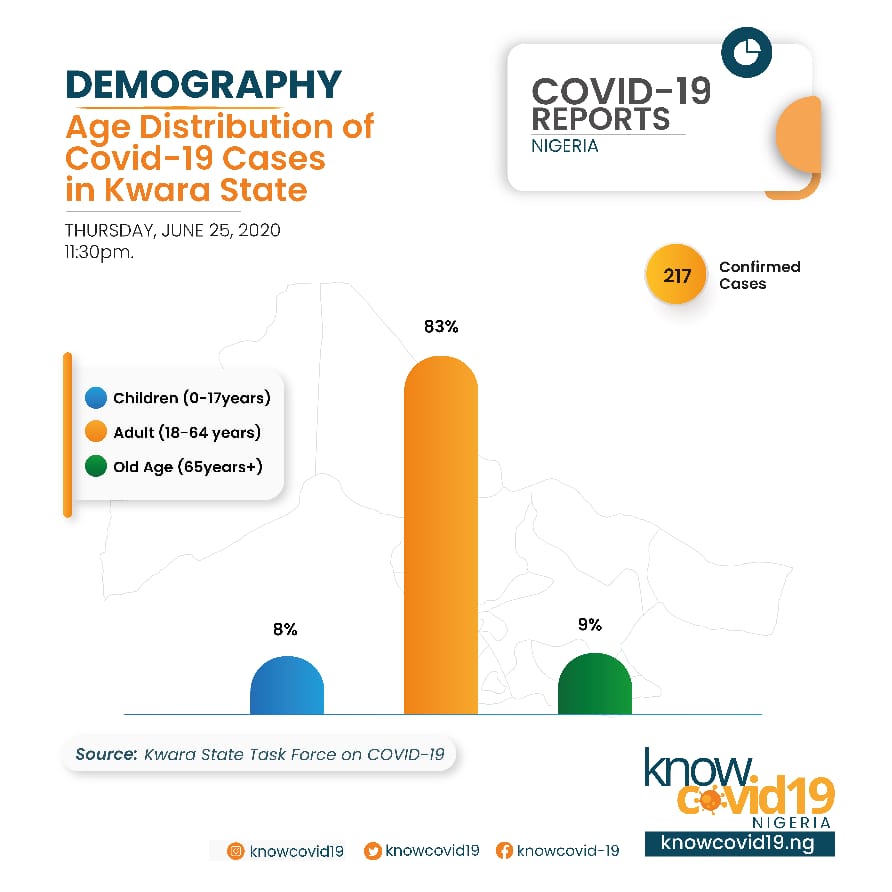 According to the report, the Kwara North Senatorial district with 5 local governments comprising of Moro, Baruten, Kaima, Edu and Pategi are yet to record any confirm covid 19 incident as at the time of filing this report.
On the demography of the victims, it was discovered that 8% of the total infected are within the ages of 0 -17, 83% are within 18 –  64 and 9% 65 years and above.
Also the death casualties has 60% of the total deaths within the age of 60 – 69, 20% between ,50 – 59 and 20% 70 and above.
The full report reads: 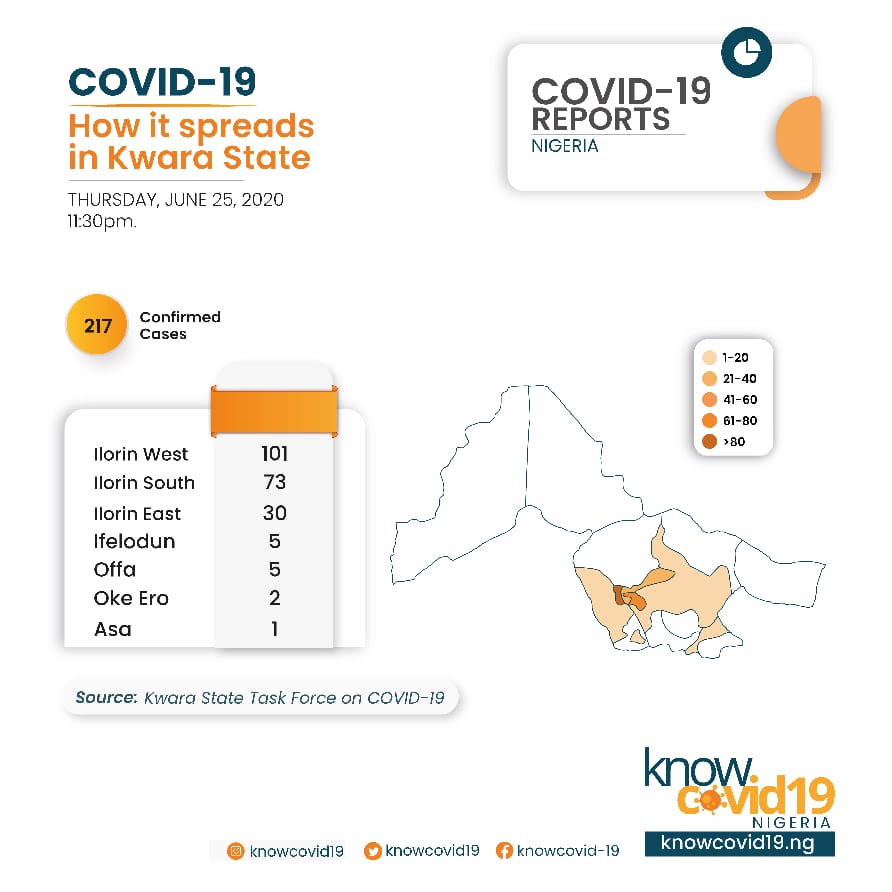 As of 25 June 2020, Kwara State has confirmed a total of 217 COVID-19 cases, out of which 82 is active, 130 have recovered, and only 5 have died from the virus in the state.
The data provided by the state task force revealed that the  death of the five (5) people was due underlying ailments, as the victims were within the ages of 50 & 81 years. Also, the virus has been confirmed in just seven (7) Local Governments Areas (LGAs) with the female gender having more infection (54%) than the male (46%). Also, the virus is more predominant in adults and could aggravate if there are existing health complications. Therefore, adults in the state must adhere to safety guidelines. 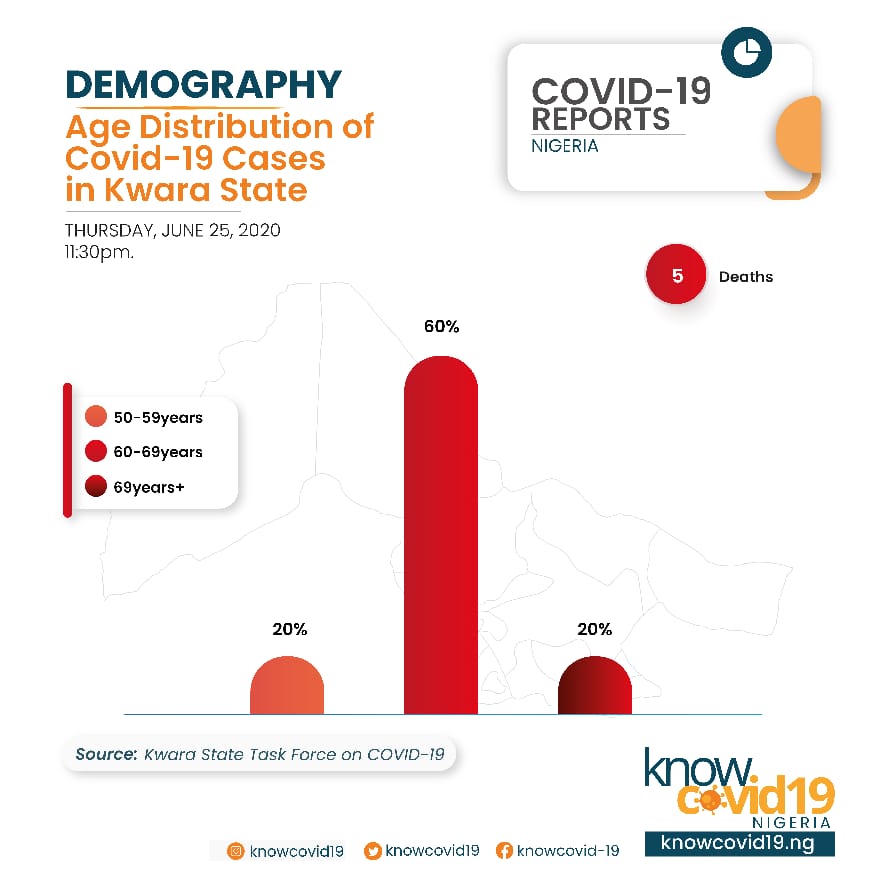 Notably, the statistics also revealed that the virus is predominant in Ilorin West Local Government, therefore, there is a need for strong awareness, stiff compliance to social distancing, wearing of masks and avoidance of crowd, most especially in the local government.
At know COVID-19 Nigeria, we are committed to the dissemination accurate, reliable, relevant and relatable information to help you Stay safe and informed about the pandemic in your community. We are grateful to the Kwara State Task Force on COVID-19 for providing us with information and for their tireless efforts in combating the pandemic in the state.
Together, we can flatten the curve and beat this pandemic. 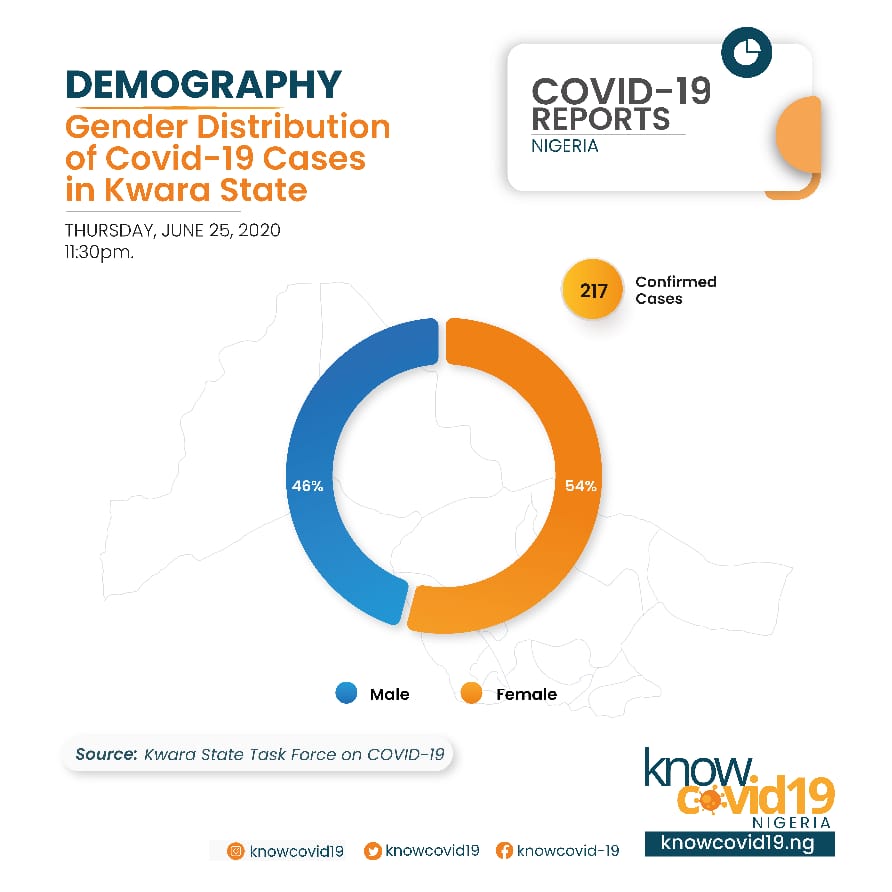