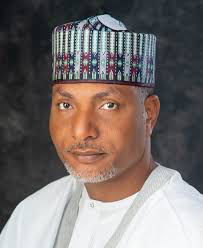 The Kwara Central Senatorial candidate of the All Progressives Congress (APC), Mall. Saliu Mustapha has redeem his pledge to gift the Kwara United football club $500 for each goal scored in their match against AS Douanes of Niger Republic on Sunday.

According to Fresh Insight’s source, the Kwara United FC, which defeated the Nigerien club in their opening game in the CAF Confederation cup received the sum of $1,500, an equivalent of one million Naira using the parallel market exchange rate.

Recall that the football match, played at the Mobolaji Johnson stadium in Lagos state, ended with a score of three to nil.

It was further gathered that the club, including the players and the management officials, unanimously shared the largesse based agreed on a sharing formula of 60-40 percent for players and coaches/other team members, with the scorers getting a slightly higher portion.