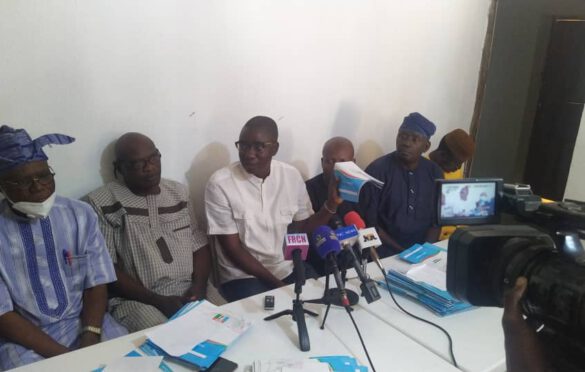 By Abdulrasheed Akogun
The Hon. Bashir Omolaja Bolarinwa led faction of the All Progressives Congress in Kwara State had obtained forms for election into the 27 party offices at the ward level.
This much was disclosed by the caretaker State legal adviser of the party, Barr. Oladimeji Mustapha at a press conference addressed at party Secretariat in Ilorin this afternoon.
Mustapha said “In spite of the unnecessary contours and roadblock mounted by some adversaries of this party, the truth has vindicated the just, that our flight of progress has continued to fly in higher altitudes. We have proved to the reactionary group that we are made of stiffer stuff and that the moving train is unstoppable.
“I am delighted to inform you that we have secured nomination forms for all prospective contestants into positions at the Wards and Local Governments in compliance with the set guidelines for the exercise.
“Furthermore, we have notified the relevant agencies as required by the Electoral Act, 2006 (As Amended).
In a nutshell, the ship is smooth sailing towards a safe harbor on this very crucial and important obligation to our Party.
“In this connection, it is pertinent to dilate briefly on the antics by  some retrogressive elements who have swung their theatrics from absurd buffoonery to high tragedy by deceptively congregating in the corridors of illegality over the chairmanship position of our party in this state.
“It is difficult to absolve the current National leadership of our party of complicity in the crisis rocking APC in Kwara State today. They have tried all the tricks in the book to pervert the cause of justice on issues, but our God is a God of justice” he added.
Asked on how the faction secured the form, he said “We paid the prescribed fee through the bank, the congress committee then sent the forms to us after confirmation of payment.
“So we’re very much ready for the congresses, our supporters across the 16 local government are eagerly awaiting the commencement of the congresses from the ward level justice” he stressed.