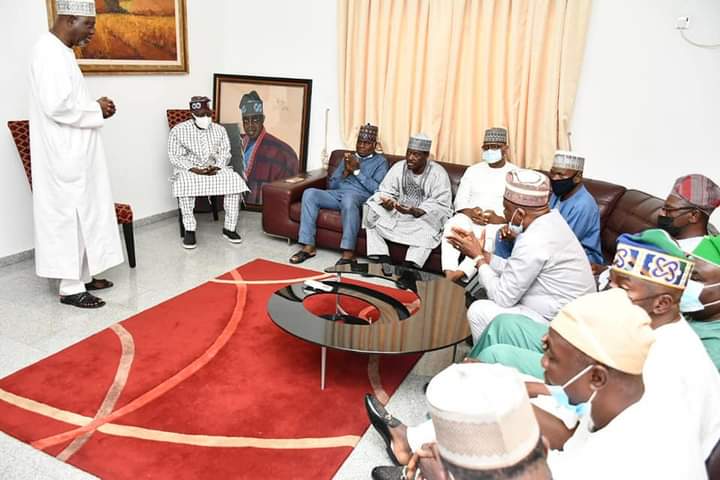 The National leader of the All Progressives Congress (APC), Asiwaju Bola Ahmed Tinubu has assured the Bashir Omolaja Bolarinwa (BOB) led Kwara APC of his absolute support, as he urges party stakeholders to consider a common ground in the interest of the Party’s electoral fortune in coming elections.

The declaration came during a visit of Kwara APC stakeholders, led by the Party Chairman, Hon. Bashir Omolaja Bolarinwa to Abuja residence of Asiwaju Bola Ahmed Tinubu on Monday.

At the over three hours long meeting, at the behest of the Kwara APC stakeholders, Asiwaju, who expressed disappointment in the ugly development in the crisis ridden situation of APC in Kwara state refuted claim in some quarters that he had a meeting with, or backed any factional Chairman of the Party from Kwara state, noting that his encounter with them was ‘casual’ at the entrance of his home and had nothing to do with Kwara APC discussion.

“Some men only bumped into me at my doorstep and said they were from Kwara and wanted to pose for pictures with me. I obliged them. Our encounter was casual, less than five (5) minutes. We had no discussion concerning Kwara APC”, Tinubu said according to sources at the meeting.

It would be recalled that a member of the Kwara state House of Assembly, Hon. Saheed Popoola on a weekly radio program had claimed the factional Chairman of APC, Prince Sunday Fagbemi was denied entrance into Tinubu’s house.

Tinubu recounted the political struggles in Kwara state spearheaded by Bolarinwa in 2019, reiterating that he and other stakeholders alike have paid their dues and must not allow the gains of OTOGE fade away.

“I enjoin you to consult with your supporters and find a common ground. If there are ways you think I can intervene to possibly bring back lasting peace in Kwara APC, do let me know. I will gladly do. The gains of Kwara political struggles must not be allowed to fade away.”

Bolarinwa, earlier in his submission said the visit was to felicitate with Tinubu on his successful surgery and also intimate the APC leader about the crisis rocking Kwara APC.

EXCLUSIVE: Kwara Gov. moves to hijack prosecution of suspected attackers of Yahman, Audu, others in Edu