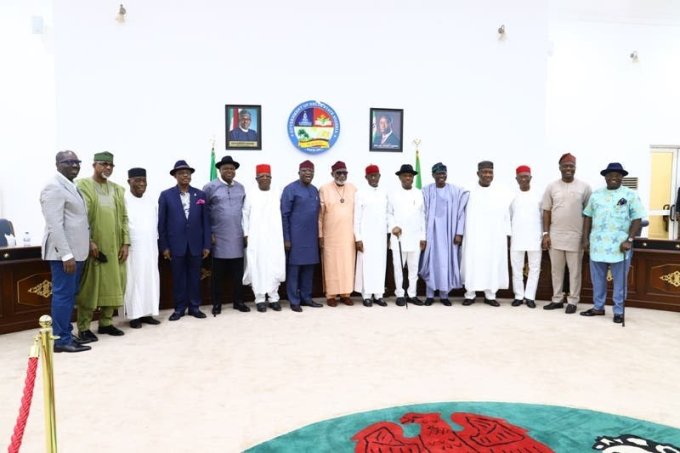 Following a meeting held by the 17 Southern State Governors, on Tuesday, the 11th day of May 2021 at Asaba, the Delta State capital, a communique, now popularly referred to as “The Asaba Declaration”, was issued, through Governor Rotimi Akeredolu of Ondo State. The communique stated, among other resolutions, that:

1. The southern Governors have resolved to ban “Open Grazing” of cattle and transporting same by foot.

2. The President (Muhammadu Buhari) should address the Nation on the precarious security situation in the land, in order to restore the confidence of the people.

3. The President should restructure the nation in the true spirit of federalism to pave the way for the evolution of State Police.

4. A national dialogue be convened by the Federal Government to resolve agitations for secession;

5. Necessity of review of revenue allocation formula in favour of the sub-national governments and creation of other institutions which legitimately advance our commitment to, and practice of true federalism.

Since then, some elements from the North who are supposed to know better and be more committed to any genuine effort at solving the mirage of problems bedevilling the country, have been coming out to vilify the Governors for their collective position on these burning national issues that have become existential threats of sort.

Chief among them were the President of the Nigerian Senate, Ahmed Lawan; Senator Ali Ndume; and Governor Yahaya Bello of Kogi State.

What they said is the very familiar blackmail line of, the governors being “elected leaders” [as if they were elected by ghosts and not the people whose concerns they responded to) that should not join the call for restructuring that would give room for the devolution of power to enable the State Governors live up to the appellation “Chief Security Officers” of their respective States. Senator Ali Ndume even went further to say that, since they have the privilege of seeing the President in camera, and therefore, should not have made their opinion public. He suggested, they rather start the restructuring from their respective States.

Ndume who chairs the Senate Committee on the Army, accused the southern Governors of playing to the gallery. He also raised the question of fundamental human rights to freedom of movement, in case of a ban on open grazing. He accused Governors of pursuing a separatist and divisive agenda, by calling for State Police.

While Yahaya Bello only reiterated the positions of the first two; he also claimed to be in charge of all the security agencies in his State.

Let someone remind Ahmed Lawan and Ali Ndume that, the positions of the 17 Southern State Governors are not different from those of Governor Ganduje of Kano, as far as Open Grazing and transportation of livestock are concerned. He has, reportedly made tremendous progress on the project.

Describing the meeting as separatist, divisive and playing to the gallery; in case the two distinguished Senators need to be reminded; the Northern Governors Forum, at their virtual meeting on February 9, 2021, unanimously resolved to ban open grazing.

“In response to the call of the Northern Governors Forum for an urgent meeting, the Nigeria Governors Forum also held a virtual meeting on the 11th February, 2021; and at the meeting, the 36 state governors agreed by consensus to end nomadic cattle rearing in the country in order to end the incessant violent clashes between farmers and herders.

Meanwhile, where were Ahmed Lawan and Ali Ndume, when some northern Governors, about two decades ago, decided to implement Sharia, thus throwing the entire nation under the cloud of religious war? Was it not separatist or divisive? Or, is it that, our distinguished senators just discovered the two words in their dictionaries?

Talking about where the Asaba declaration would get the required legal teeth to bite, in case of violation; the southern Governors should consult their northern counterparts to find out where the “Hisbah” Sharia police, breaking bottles of beer across the region got its own legal teeth.

One things they fail to acknowledge, or deliberately forgot, in order to impress whoever, is that, when power is devolved such that, there is States police, it would be for the 36 States and the Federal Capital Territory, Abuja; not only for the 17 Southern States.

As for Yahaya Bello, who downplays the need to ban Open Grazing and the imperative of restructuring, even though we know the State is the strategic national headquarters of armed robbers and kidnappers, not much energy needs to be dissipated, responding to his interview with Ṣeun Okinbaloye of Channels Television, on the program, “Politics Today”. He only advertised a lack of capacity to place issues in their proper perspectives.

He was busy trying to substitute the need for a national dialogue, with the President’s signing of Executive Orders, in his words, “granting financial autonomy to the Judiciary, legislature, blah, blah blah….! How does granting financial autonomy to the Judiciary and legislature at the state level prevent, herders-farmers clash, or stop kidnapping? That is vintage Yahaya Bello for you.

His appointees are not safer than the “most vulnerable citizen” in Kogi State, as one of his pension Commissioners got killed by kidnappers and made away with a Local Government Chairman, about a fortnight ago, before the latter regained his freedom, some days ago. A Federal lawmaker, from Edo State also had a gory testimony to give, as he twice, narrowly escaped being felled by kidnappers’ bullet within hours, along Okene-Lokoja-Abuja highway.

Somebody should help ask the Governor; when last did he visit Kogi West Senatorial District on working-tour?

From Kabba, through Ayetoro Gbede, Mopa, Isanlu down to Ẹgbẹ́; the only presence of governance that is felt along that axis is “Neglect”. He only shuttles between Lokoja, Abuja and Okene, his hometown. So one wonders how he claims to have an idea of what the herders-farmers relationship is like in those areas.

Trying to use the mantra of “National Unity” that is not reflected in the pattern of federal appointments made by President Muhammadu Buhari, is no longer tenable. It is also an illusion of the highest order, to claim that, the basis of our co-existence is not negotiable.

If Russia could become what it is today; then those of, even America and Canada is a question of time. The so-called United Kingdom is already being threatened by the call for the independence of Scotland via referendum, while Northern Ireland is a sore point in the history of the British nationhood.

On a final note; when your belief in the “Unity and indivisibility” of Nigeria as a nation is irrigated by the undue advantages you have over others, in the distribution of socio-economic opportunities and the general scheme of things, you don’t expect the decibel of their own cry of “National Unity and Indivisibility” to be as high as your own.

A situation where the lopsidedness of Federal appointments is in your favour, of course, we understand the source of strength of your “Pan-Nigerianism”, which is not borne out of sense of justice and equity.

Our so-called non-negotiable National Unity and imagined indivisibility, if not anchored around socio-economic justice and equity is nothing, but a mere semantic, deployed for mere rhetorics by those who have commandeered our commonwealth and live in a false hope that they would hold on to it, till eternity.

If people could be restricted to selling drugs in a Chemist or pharmacy stores, with the prohibition of drug-hawking flying, without any issue arising from their fundamental human rights, then asking herders to stop “Open Grazing” and buy land for ranching, just like a Chemist rents shop where he vends his drugs, would have no issue of fundamental human rights, trust me, if you are liberal-minded enough.

Besides, when, where and if the right of a few threaten the existence of many, the latter becomes a priority. The majority of us (Nigerians) who do not have cattle to herd, will have to, till the land, plant and nurture crop for livelihood.

The subtle blackmail by Lawan, Ndume, and other voices of unreason, would be dawned by cry and need for justice and Equity.