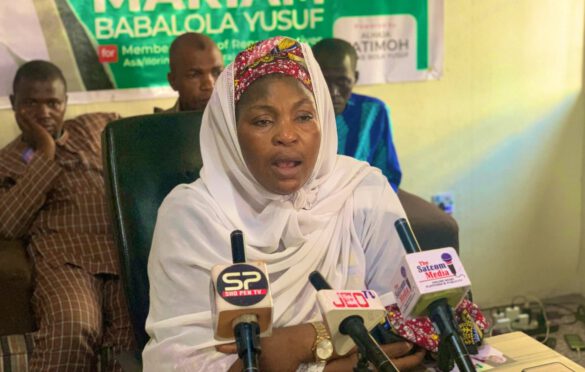 Aspirant for Ilorin/West Asa Federal Constituency under the All Progressives Congress (APC) in the just concluded primary elections, Mrs. Maryam Babalola Yusuf has accused the Party of manipulating and malpractices of the process of that elections.

Babalola, who expressed her displeasure over the process and eventual outcome of the Primary election conducted by the party in Ilorin on Friday, said the outcome of the election is not displeasing and unexpected, noting that the exercise was not free and fair to all contestants.

She claimed that herself and other aspirants were not given the opportunities to know the delegates that casted the ballots in the election.

“The delegates we saw at the venue were different from the delegates list we were given, definitely there’s malpractices in election process.”

“I hereby call on the Governor of the state and the leadership of the party to look into this matter”. She said.

Speaking further, The Aspirant who alleged that delegates list was manipulated, urged the party leadership to the needful so as not to mar its chances  in the 2023 general elections.

Conclusively, Maryam who congratulated Muktar Shagaya for emerging as the Party’s flag bearer for the Ilorin West/Asa federal constituency, pledged her support for Mall Abdulrahman Abdulrazaq’s re-election bid in 2023 poll.