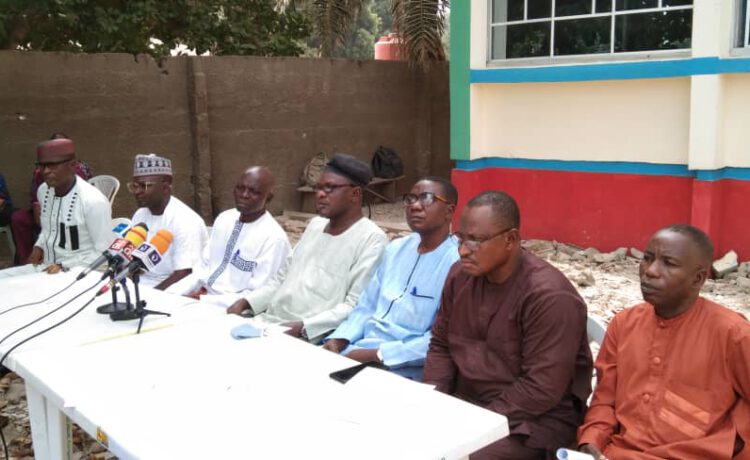 0Share
By Imam Moromoke
Members of the caretaker State working committee of the ruling All Progressives Congress has challenged the Gov. Buni led caretaker National Working Committee, to make public the suspension proceedings of BOB which they purportedly rely upon to issue letter to Alh. Abdullahi Samari.
This challenged was thrown at the party hierarchy at a press conference addressed by the exco members at the party secretariat, in Ilorin this afternoon.

The conference which was addressed by Chief Theophilus Sunday Oyebiyi, Vice Chairman Kwara North also had
Chief Dele Ogunbayo, Chairman Isin LG, Mohammed Shola Tajudeen, State Financial Secretary, Joseph TSADO,  Welfare Secretary, Dantala Yaro, State Treasurer, Barr. Ladi Mustapha, State Legal Adviser, Alhaji Fatai Shola Rahman, Vice Chairman Central among others on the high table.
The group while bemoaning the crisis in the party, decried the back door purported appointment of the caretaker Deputy Chairman, Alh. Abdullahi Samari as the Chairman, stressing that it lacked any basis and justification.
“The erstwhile State Chairman was sworn in as State Caretaker Chairman along with other Caretaker Chairmen in Abuja on 11th  December, 2020.
” On the strength of that derived  authority , the State Caretaker Chairman, Hon. Bolarinwa swore in other Caretaker Committee members from wards to state on 14th December, 2020 at a well attended and carnival like ceremony.
“Alhaji Sanmari Abdullahi, State Caretaker Deputy Chairman who is purported  to replace Hon. Bolarinwa also dutifully took his oath of office alongside other exco members and returned his signed acknowledgement of the oath of office.
” The rumoured issuance of appointment letter to him as  State Caretaker Chairman is an aberration and a travesty of Justice.
“The decision to embark on this unlawful route is said to be based on a purported suspension of Hon. Bolarinwa by the state’s erstwhile exco. This is at best a wicked concoction and nothing can be farther from the truth.
“As the erstwhile exco, we are not aware of any wrongdoing that would have warranted any enquiry let alone investigation and a far reaching decision of  suspending Hon. Bolarinwa as the  State Chairman.  Hon. Bolarinwa presided over our last 3 State Working Committee meetings of which all members attended on 16th,30th November, and on 7th of December.
” All records of those meetings are available. Where and when then did any suspension take place when NEC decision was on 8th of December?
It is unfortunate  that the national body of our party will rely on any purported suspension as contained in Sanmari’s letter displayed on the social media.
“Neither did the chairman, Hon. Bolarinwa see the petition, not to talk of defending himself if there was any. It is trite that anybody alleged must enjoy the right of defending himself.
” As Progressives and members of a party that prides itself as respecters of the rule of law, it  should be expected  that we carry out due diligence at all times, respect our constitution , follow our rules and be above board in dealing with all our party’s  affairs. Hon. Bolarinwa has consistently remained impeccable.
“In this respect, we reject any decision replacing Hon. Bolarinwa with Abdullahi Sanmari as Kwara State APC Chairman. While the matter is being appropriately handled , we enjoin our teeming supporters to remain calm and and prepare for the forthcoming registration exercise” he pleaded.
Tags:Hon. Bashir Omolaja BolarinwaKwara APC crisis
Share on FacebookShare on Twitter
FreshinsightJanuary 25, 2021