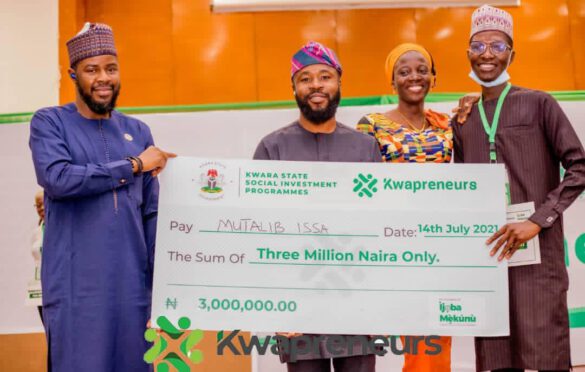 Applying for the Kwapreneur program was never in my plan, even though I saw various adverts on the initiative, I was not going to register, definitely not with the petty politics played in this part of the world!

The turning point, however, was after I listened via livestreaming to the Ag. Manager of KWASSIP, Mr. Mohammed Brimah’s radio program, it was convincing enough to make me realise that the program has nothing to do with politicking, few hours to the official close of the program, I finally did applied.

We later got informed that over 7000 persons made an online application, after a thorough screening, about 500 persons were selected to pitch their business ideas, they were asked to come with 3 – 4 copies of their business plans.

They pitched to a panel comprising of staffs of Fidelity Bank, representatives of SMEDAN, Ministry of Enterprise and some staffs of KWASSIP, the pitch session was infact streamed online, a pointer that KWASSIP had nothing to hide – my view.

Myself and my partner did our utmost best in pitching our Iru-lorin (locust bean processing) idea, we were asked technical questions, and we gave answers accordingly, the last question was asked by Mr. Brimah, and it went thus: “Would you rather walk away with 700,000 naira right now or repitch to another panel of judges where you can get 3,000,000 or nothing?”

The answer came from me, and I told him we rather choose to repitch to another panel, and that was it! From the expression on their faces, I was sure we did well, after leaving the place, I went to facebook to watch our pitching again, saying I was satisfied is the least I could say, we did extremely well and we were hopeful.

For a few while, we waited, and then the mail came, finally, we had qualified for a loan under Kwapreneur, 170 of us! We were asked to come for documentation and to open an account with Fidelity bank, even at this stage, we never knew what we would be getting, but the hope was still intact.

Then, training was next, it was a physical exercise that was carried out at the banquet hall, not long after, wootlab also trained us, we took five (5) different classes and had an assessment at the end of each, this lasted for about two (2) weeks, the beautiful part of it was earning five (5) certificates in the process, I had a 100% in all.

After the whole process, we all waited for the D-day, the day that KWASSIP will disburse funds to 170 young entrepreneurs through Fidelity bank, some waited patiently whilst others were aggressive in their waiting, alas, the date was picked!

We all got notified, the D-day was not to come without an exhibition, the Governor was billed to attend, he came but didn’t make it early enough, he delegated the deputy governor to stand in his stead, and when he came to our stand where we displayed our Iru-lorin, we had a brief discussion about the idea, he jokingly said: “I love your idea, you must get 3 million naira”, he took my phone number and promised to visit.

Iru-lorin was the 9th business idea to pitch, we left formalities behind, talked a little about our idea and went straight to what we need the money to procure and our numbers (finance), after which we were asked questions from the judges, the satisfying look on the judges after our pitch gave myself and my partner – Sulaiman a level of confidence that 3 million will be ours, alas, it was so, but not until after the panel of judges compared their results and announced in no particular order, the best five (5) pitches.

Lo and behold, Iru-lorin business idea was one of the best five (5) pitches, it was a moment of fulfillment and joy, all thanks to KWASSIP and the government of Kwara state for giving Mr. Mohammed Brimah the platform to display his talent, and trusting him by not interfering “politically” in the selection process.

The aftermath of the program, however has been politicised by government paid media urchins, led by a particular aide of the government, a petty fellow, famously known for fighting everyone (lovers of the Governor inclusive), hence, courting more enemies for the government on a daily basis.

No one can actually dispute that the said aide is petty and lowly, to the extent of using a pseudo account everyone knows him with to spread innuendos about the Kwapreneur initiative, I would have called him out if not for the intervention of some respected figures, but his cup will definitely be full soon, I only pray that he finds “Solace” in his loud mouth.

Back to the main theme, “3 million naira KWASSIP loan; Governance or Politics?”, every right thinking person will agree with me that the initiative is a product of right-thinking, and should be sustained by this government and subsequent ones, kudos to the Governor Abdulrazaq led government, on this one, it really did good!

Issa Mutolib Ayobami is an alumnus of Ahmadu Bello University, Zaria and the Accra Business School, Ghana, he is a serial entrepreneur, revenue consultant, PR consultant, and a community development practitioner.