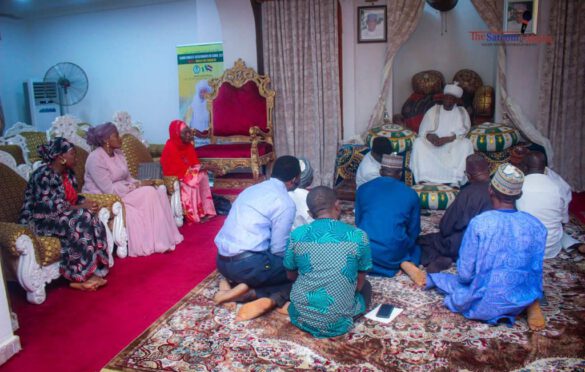 The Emir of Ilorin and Chairman, Kwara State Council of Chiefs, Alhaji Ibrahim Sulu-Gambari, has approved the decision of the state Council of Nigeria Union of Journalists (NUJ) to convoke a Colloquium in commemoration of his 27th year anniversary on the throne.

Alhaji Sulu-Gambari will be 27 years on the throne of his forebears November 11, 2022.

The monarch gave the approval when the state NUJ Chairman, Abdullateef ‘Lanre Ahmed, led members of his executive on a royal homage to the Emir’s Palace in Ilorin today.

He expressed delight over the resolution of NUJ to honour him.

Alhaji Sulu-Gambari, however, informed that it was part of his prayer, upon assumption of the royal stool, for Ilorin Emirate to grow in leaps and bounds.

The Emir, who appreciated the progress Ilorin has attained since he came on board, prayed to the Almighty Allah for more bounties in the community.

The state NUJ Chairman, ‘Lanre Ahmed, who spoke earlier, told the monarch that the NUJ leadership was at his palace to pay homage and applaud his role in ensuring peace and tranquility in the Ilorin Emirate.

Ahmed said the planned colloquium in honour of the Emir of Ilorin was to chronicle the achievements of Alhaji Sulu-Gambari in his last 27 years of being in the saddle.

He thanked the monarch for always emphasizing on peace and harmony in the state, saying that no society thrives amidst unrest.

Also speaking, the state Chairman of National League of Veteran Journalists (NALVEJ), Alhaji Mohammed Tunde Akanbi, commended the Emir of Ilorin for his purposeful leadership that has positively transformed the city of Ilorin.