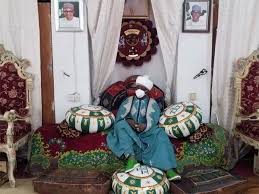 Historians do not agree on the origin of the name Ilorin, one account has it that the name originated from sharpening of cutlasses from a big stone and thus the name is believed to derive from the words llorin” the sharpening of iron. The stone can still be found in Bamidele’s Compound in Idiape Quarters of Ilorin. The other account is that the name derived from the words “Ilu-Erin” which translated as “the town of Elephants”. Whatever its historical origin, Ilorin has over the years evolved a culture that is distinct and peculiar, a culture that is neither Hausa nor Yoruba non Fulani, a culture that can only be described as Ilorin.

It is an incontrovertible fact that the 25-year reign of the Emir of Ilorin, Alh (Dr) Ibrahim Sulu-Gambari, has brought about unprecedented development of the Ilorin Emirate in particular, and Kwara State in general.

Sulu-Gambari, an accomplished Jurist and chairman, Kwara state Council of traditional rulers, ascended the throne of his forefathers on November 11, 1995.

Of the 25years the Emir has spent on the throne, only four fell within military rule, with the remaining 16 in civilian rule.

Within the 16 year civilian rule, the Emir was lucky to have 3 illustrious sons of Ilorin as governors in quick succession. Admiral Mohammed Lawal of blessed memory ruled the state between 1999 and 2003 while the immediate past Senate President and Waziri Ilorin, Dr Abubakar Bukola Saraki ruled the state between 2003 and 2011, another Son of Ilorin, Abdulrahman Abdulrazaq elected Governor in 2019 pilots the affairs of the State till date.

During the 13 years (and still counting) reign of Lawal, Saraki and Abdulrazaq Ilorin witnessed tremendous development.

Besides patronising local contractors, the bulk of whom were Ilorin indigenes, the Lawal administration opened up the New Yidi road-Asa Dam axis of the metropolis, through the construction of a low cost housing estate(Irewolede Estate) and citing of the multi- million naira head office of The Herald Newspapers in the area.

The Lawal administration also opened up a number of access roads in Ilorin to facilitate easier movement of the people and as well boost economic activities in the state capital.

On assumption of office, the then Governor Saraki made the restoration of peace the cardinal objective of his administration.

Saraki’s administration did all within its power to ensure that those in possession of illegal weapons surrendered them. The administration also recorded huge success in freeing Ilorin and the state at large from the destructive activities of cultists, which had become very rampant before Saraki became governor.

Having successfully restored peace to Ilorin, the Saraki administration commenced execution of developmental projects in earnest.

Saraki’s administration has about four housing estates to its credit- Mandate Housing Estate (phases 1-3) and the Harmony estate, Akerebiata.

The establishment of Kwara State University, Malete, an emerging citadel of excellence by every standard, has been variously said to be one of the biggest of Saraki’s footprints in Ilorin Emirate.

The reign of the Emir has also witnessed the remodeling and expansion of the most cherished value of Ilorin people – the Ilorin Central mosque.

Above all, Ilorin Emirate and the state at large have enjoyed peace and tranquility the most part of the 25- year reign of Sulu-Gambari.