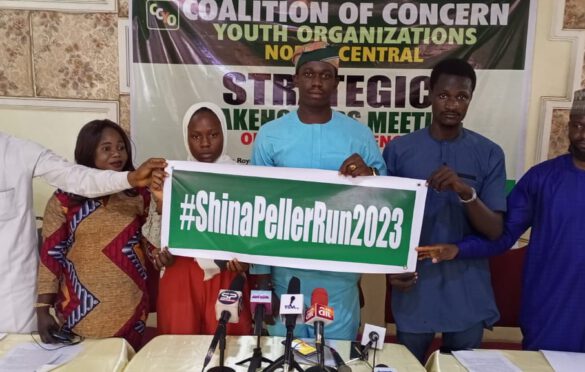 A serving member of the House of Representatives, representing Iseyin/Iwajowa/Kajola/Itesiwaju federal constituency of Oyo state, Hon. Shina Abiola Peller, has been asked by the coalition of youth organizations in the North Central geo-political zone to contest the 2023 presidential elections.

Addressing journalists in Ilorin on Thursday, the convener of the Coalition of Concerned Youth Organizations, North Central, Ambassador Moses Adeyefa, flanked by other members of the group, said that time is right for a youth president.

The people, who said that young Nigerians constitute over 65 per cent of the country’s total population, added that they had been deprived from the dividends of democracy and marginalized from the political and economic structure of the country.

The coalition also said that lack of involvement of educated people in grassroots politics and the participation of the vast majority of young Nigerians in active politics had further created decayed and failure in the system.

“The Nigerian youths are the number one victim of a failed system of government, bad governance, corruption, wrong governmental policies in critical sectors, such as education, economic, mining and manufacturing. The common Nigerian youth, due to the decay in our political and economic systems, has automatically become a tool in the hands of bad politicians as political stooge and thugs.

“We, the leadership of the concerns Nigerian youths, under the umbrella of the Coalition of Concern Youth Organizations with over 50 independent youth bodies and membership of over 40 million youth in the 36 states of the federation including the federal capital come to the realization we can’t allow those who do not have a stake in the future of Nigeria to continue to determine our future, it is therefore imperative for us to come together as youth with common pains and consanguinity, and take control of our future by getting involved in party politics and the electoral processes, with the aim of supporting young competent and result-oriented youth to get into the position of leadership across the 36 states of the federation”.

The people, who called on Hon. Shina Peller to contest 2023 presidential elections as a qualified youth, said that, “though, he represents the people of Iseyin/Iwajowa/Kajola/Itesiwaju federal constituency of Oyo state, but in reality have represented the youth well across Nigeria”.

“Hon. Shina Peller is the most popular politician among the youth constituents. There is no zone in the modern society that the Oyo-born politician does not have friends and followers. This is due to his selfless, humanitarian and detribalized nature. He is a friend to the Hausa, Fulani, Igbo and Yorubas. The lead generation initiative founded by Hon. Shina Peller has trained over 1.2 million youth across the 6 geopolitical zones.

“Being the Ayedero Ile-Yoruba, the promoter of Peace, we have watched closely his statewide peace tour across Nigeria, and timely intervention to communities ravaged by attacks and violent conflicts in the northern Nigeria. Lately, he has champion the course for the birth of a new Nigeria, a mobilization front for youth participation in a new system that will give priority to a system that build institutions above individual, a system that puts the peace, unity and prosperity of Nigeria at the center stage.

“These and many more are our reason for calling on Hon. Shina Peller has the preferred choice for the seat of the president federal republic of Nigeria, since his victory at the poll will bring peace, unity and growth to Nigeria, we are ready to sacrifice our resources to fund his campaign through the crowd funding system that the youth will be creating for Shina Peller and managed by the coalition of the concern youth organizations.

“The failure of Hon. Shina Peller to heed to our call to run for the position of the president of the federal republic of Nigeria in the 2023 election, we shall not hesitate to sue him to court for the mental devastation.”