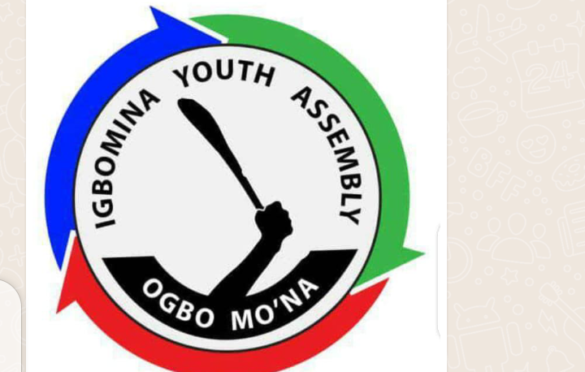 The Igbomina Youth Assembly, an umbrella body of Igbomina youths have charged political parties to in the spirit of justice, fairness and equity cede its National Seats to the Igbomina bloc of Kwara South, stressing that the age long marginalization of the Igbomina tripod of the Kwara South Senatorial district must be addressed with the 2023 forthcoming elections.
The group via a press release signed by its President, Secretary and Publicity Secretary Engr. Jimoh Rasheed Temitope, om. Adekeye Segun Emmanuel and Com. Abdulrasaq Ismaheel Opeyemi respectively reads “2023 political play is already under way Nationwide. Traditionally, especially in the context of this part of the world, accompanying politics are political gimmicks and scheming which have huge effects on the final decisions of party faithfuls and the electorate. But our BIG question is: *WHAT IS THE FATE OF THE IGBOMINA IN THIS ARRANGEMENT?*
” It is a parable of a man who has hollow eyes, he has to begin crying from a distant point. To avert another score of denial and obvious marginalisation,  Igbomina Youth Assembly, a socio-cultural group of youths in the Igbomina clan of Kwara State, we are here to specifically express our position as regards the stroke of recurrent slaps we suffer politically within the Kwara South Senatorial District.
“Let us go down the memory lane, since the rebirth of democracy in 1999, the distribution of the political cake, as far as Kwara South is concerned, is an appalling example for the Igbomina axis. Only between 1999-2003 senatorial and 2007-2011 House of Representatives  that an Igbomina man Senator Makanjuola Sulaiman Ajadi occupied the Senate seat in 1999-2003 and another Igbomina man, Alhaji Kola Yusuf 2007-2011  occupied the office of the Representative (IFELODUN, OFFA AND OYUN LOCAL GOVERNMENT).
“Afterwards, all the political gains accruing from our Commonwealth have never come down with our favour. Indeed, it has been a lopsided practice (Especially Kwara South Senatorial seat that belong to Igbomina, Ibolo and Ekiti blocs and that of house of representative IFELODUN, OFFA AND OYUN LOCAL GOVERNMENT Axis).
” To substantiate the gross span of marginalisation befalling the Igbomina of Kwara State politically, the positions of the Senate and the office of the House of Representatives “IFELODUN, OFFA AND OYUN CONSTITUENCY” have only been filled by Igbomina Indigenes one time each, Senator Makanjuola Sulaiman Ajadi (1999-2003)and Alhaji Kola Yusuf representing “IFELODUN, OFFA AND OYUN CONSTITUENCY” (2007-2011) respectively.
“We come out boldly to ask for equity, justice and fairness to play in.  We yearn for fair political permutation, we demand the true fair formula that is ideally recognized to be the logic of genuine democracy and the first principle of humanity.
“The Igbomina Youth Assembly hereby declares that we are only fervently working for and championing the course of the Igbomina’s quest to the Green and the Red Chambers of the Federation.
“if the Igbomina Indigenes are not considered for the two posts, we announce here that it is our strong decision that we do not pledge solidarity to any party that fails to fix Igbomina politicians for the two positions” it stressed