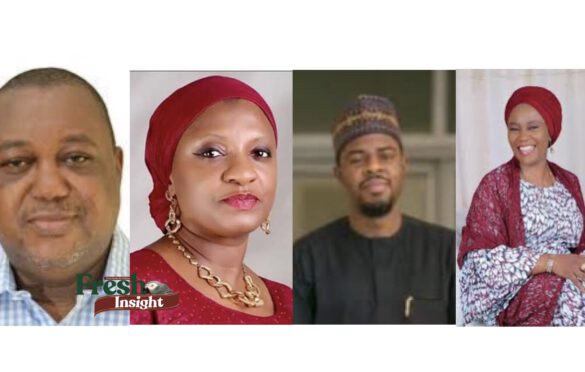 More political appointees of Governor AbdulRahman AbdulRazaq intending to run for elective offices in the 2023 general elections are turning in their resignation letters, Fresh Insight can report.

Recall that the Kwara state government had on Tuesday, gave 15th April, 2022 deadline to political appointees seeking nominations for elective positions through party’s primaries to resign from office.

Consequently, no fewer than seven (7) political appointees in the AbdulRazaq’s administration has tendered their resignations, among which are Commissioners and Special Advisers.

In a letter dated 12th April, 2022 and addressed to the Kwara state Governor, Aluko notified his principal of his resignation, citing his “political ambition to participate in the APC incoming primaries” as reason behind his decision.

Aluko thanked AbdulRazaq for the opportunity and confidence accorded him to serve as Special Adviser, Special Duties.

Other appointees of AbdulRazaq that has resigned their appointments includes Hajia Sa’adatu Modibbo Kawu, Fatimah Arinola Lawal, Mohammed Brimah and Harriet Afolabi-Oshatimehin among others.

Recall that Fresh Insight had on 7th February, 2022 published details of Gov. AbdulRazaq appointees warming up to run for elective positions in the 2023 general elections. https://freshinsightnewstv.com/gov-abdulrazaqs-appointees-running-for-elections-in-2023/

Hajia Saadatu Modibbo Kawu resigned was the commissioner that represented Ilorin South in AbdulRazaq’s cabinet. She was first seconded to the Ministry of Tertiary Education and later, Ministry of Education after the cabinet dissolution and reconstitution by the Governor.

Saadatu Modibbo Kawu, an Alumni of Usman Danfodiyo University, Sokoto and University of Ilorin, and an educationist by profession has declared her interest in the Ilorin East/South Federal Constituency seat, currently occupied by Hon. Ganiyu Saka Cook Olododo.

Hajia Fatima Arinola Lawal is the daughter of former Governor of Kwara state – Mohammed Alabi Lawal and commissioner that represented Ilorin East in AbdulRazaq’s cabinet.  She is also one of the commissioners returned after the cabinet dissolution by the Governor.

Arinola-Lawal initially manned the Water resources ministry before she was reappointed as commissioner for Enterprise.  His brother, Alhaji Hakeem Oladimeji Lawal contested the 2015 and 2019 gubernatorial elections and currently a gubernatorial hopeful under the Social Democratic Party (SDP).

Ilorin South born Alhaji Ahmed Yinka Aluko served as Special Adviser on Special Duties to Gov. AbdulRazaq and an aspirant for Kwara Central Senatorial District in the 2019 elections. He also contested for the seat in the 2015 elections under the PDP.

Aluko is an old horse in the Kwara political space, having served as Special Adviser on Security to former Governor Bukola Saraki and also emerged the Deputy Governorship candidate of the opposition PDP in the 2015 general election, to persuade him over hijack of his duly won Kwara Central Senatorial ticket for his then contender and 2nd runner up – AbdulRahman AbdulRazaq.

is the most experienced of AbdulRazaq’s appointees having served in the highest number of ministries since her first appointment as Commissioner for Agriculture, and later Communications, Youths and currently, Mineral Resources.

Oshatimehin who was the Commissioner from Ifelodun local government of Kwara state is a financial expert, nursing ambition to represent the people of Ifelodun/Offa/Oyun Federal Constituency at the National Assembly, to replace the incumbent Rep. Tijani Kayode Ismail.

Recall that when she was renominated as commissioner by Gov. AbdulRazaq, her screening which she eventually scaled through was threatened by the Kwara state House of Assembly. This, Fresh Insight gathered is not unconnected with political bickering with members of Kwara state House of Assembly from Ifelodun local government over clash of political interests linked to her initial intention to run for the State House.

Salmon Jawondo, SAN hails from Asa and he served as commissioner for Justice and Attorney General of Kwara state.

Jawondo, an activist is synonymous with the longstanding struggle that eventually change the political status quo in Kwara with his numerous court cases and advocacy to challenge what he considered the anti-people decisions of the previous administrations.

Jawondo, is an alumnus of the University of Lagos and former Chairman of the Nigerian Bar Association (NBA), Ilorin Branch, showed interest to represent Asa/Ilorin West Federal Constituency in 2019 and currently, he is also interested in running for the position in the 2023 general elections.

Jawondo, according to reliable sources haha tendered his resignation to the Governor through the Secretary to the State Government over his ambition.

Dr. Raji Rasaq is a medical Doctor and served as Commissioner for Health, from Ekiti local government.

He contested Irepodun/Isin/Ekiti/Okeero Federal Constituency seat in the 2019 elections under the PDP and he is also interested in retrying his luck come 2023.

Mr. Kayode Oyin-Zubair is a household name in the community development parlance and a former member of the Lai Mohammed political group.  He was at the fore front of the struggle against the domineering tendencies of Dr. Bukola Saraki’s camp over the Legacy group of the APC between 2016 and 2018, when Saraki eventually left the Party.

Oyun-Zubair, who was an arrowhead of the Samari-led factional Kwara APC in 2017 currently serve as Senior Special Assistant to Governor AbdulRahman AbdulRazaq.

The Igbaja born politician gave Ifelodun/Offa/Oyun Federal Constituency and later, Omupo Constituency House of Assembly seat a shot in the build up to 2019 elections, with no luck.

He is however making efforts to stage a stronger relaunch in 2023.