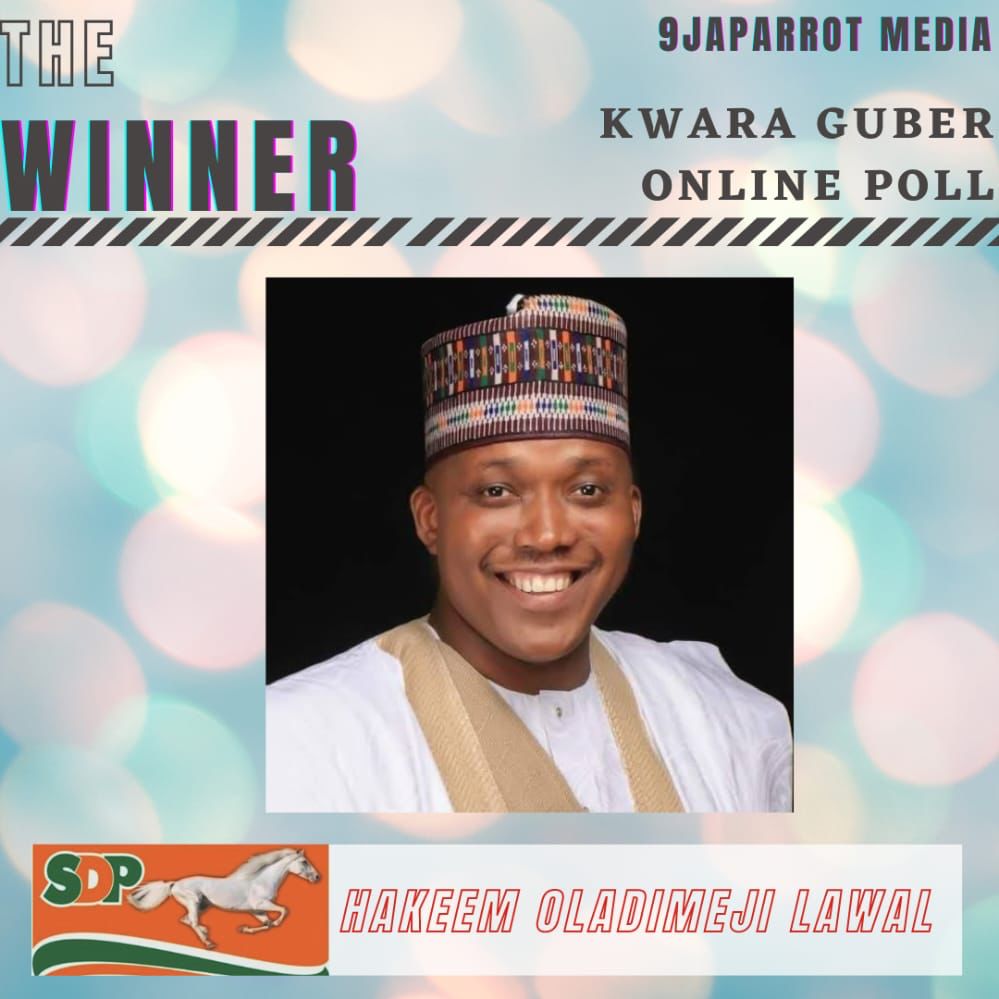 The Social Democratic Party (SDP) governorship candidate, Hakeem Lawal has been voted as the number one choice of Kwarans in the 2023 governorship election.

According to the analysis of a recent statewide online poll by 9japarrot Digital Media and Communications to determine the preferred governorship candidate of Kwara indigenes and residents.

The final results  released early hours of Wednesday 26th, October 2022 indicates, 45% of Kwarans prefers and would vote for Hakeem Oladimeji Lawal as Kwara Governor comes in 2023, while 18 % would vote for the incumbent Governor, AbdulRahman AbdulRazaq.

Respondents of the survey carried out between 12am on October 24th to 11:59pm on 26th were asked a single question, who would they prefer as the next Governor of Kwara State in 2023: with an option to choose between the 5 major contenders as listed above.

No fewer than 1927 people participated with respondents spreading across the three Senatorial zones of the State including 16 Local Government in the state. The survey was carried out through an online poll platform (handypolls) with a high response rate.

Similarly, the results from the poll showed that Hakeem Lawal was the most preferred candidate because he maintained the number one position from the beginning of the poll to the end, unlike others who overtook others.

For example, on the day of the polls, the incumbent Governor ended in the 4th position but moved to the second position on the second day (end) of the poll. Likewise, the PDP candidate, Abdullahi Yaman maintained his third place throughout.

Hakeem Lawal clearly polled massive votes as he’s the only one with 45% against his runner-up, AbdulRahman AbdulRazaq who polled 18%.

The poll survey posted on our official Facebook page also generated over 300 plus comments and a reasonable number of shares, the post also reached over 20,000 plus people which is an indication that Kwarans are indeed eager to access all gubernatorial candidates.

The majority of the comments under the post also tally with the poll results as most preferred that Hakeem Lawal should be the next Governor of Kwara State or the continuity of the incumbent Governor.

“Clearly, as the survey indicated, Hakeem Oladimeji Lawal, was the clear winner in the overall poll results.” 9japarrot Media noted.

Hakeem Lawal’s candidacy is also a threat to other contenders as the poll result projected him as the choice of the majority of the youths who participate in the Online poll.