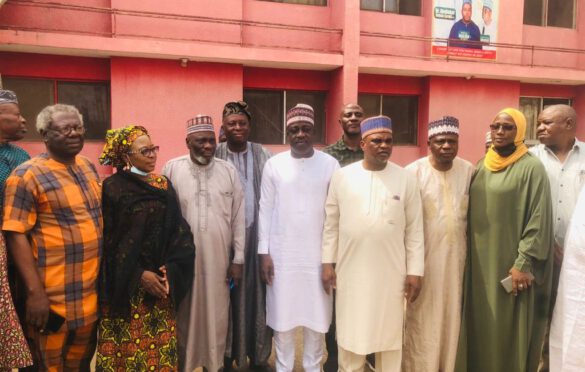 …throws weight behind PDP zoning of Governorship to Kwara North

Former Minister for Youths and Sports and Peoples Democratic Party (PDP) stalwart, Mallam Bolaji Abdullahi has said the present lack of direction in the governance of Kwara State demands that all PDP members must unite towards rescuing the State. He therefore pledged his total support for the party executive in order to realise the objective of returning PDP to power.

Abdullahi made the statement today, during a visit to the Kwara state PDP secretariat in Ilorin to formally congratulate the new executive of the party on the assumption office following the last Congress.

During the visit, the former Minister called on party members to make the necessary sacrifices required for the party to achieve victory in the 2023 elections in the State and also reaffirmed his decision to support the zoning of the governorship ticket of the party to Kwara North.

In his response, the party Chairman, Alhaji Babatunde Mohammed thanked Abdullahi for his visit and his commitments towards ensuring that PDP record a good outing in the next election.

The party chairman, who said he was happy that Abdullahi was ready to offer the needed support even before the party demands for it; pray to God continue to guide and protect the former Minister.

Meanwhile, supporters of Bolaji Abdullahi under the banner of Omolúàbi group, who accompanied the former Minister on the visit have called on him to run for office in 2023.

Speaking on behalf of the group, the Chairman, Engr. Asanloko said he has the mandate of the group to prevail on Abdullahi to ensure he runs for office in the next election.

Responding, Abdullahi said he has not considered running for any other political office aside the governorship. He, however, promised to consult and revert back to the group at the earliest possible time.