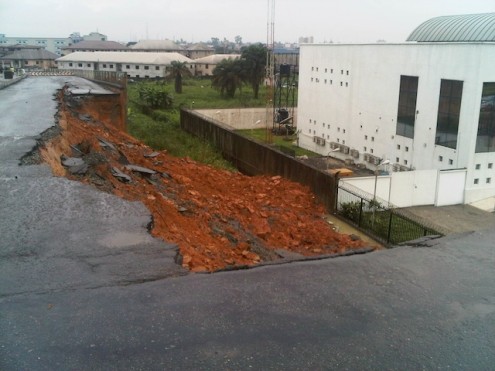 The newly awarded construction contract for the #2.7billion Flyover at the Tanke -Pipeline Junction in Ilorin, Kwara state capital is awarded to a company linked to collapsed multi billion Naira Odili flyover in Rivers state.

According to Commissioner for Education and Human Capital Development Hajia Sa’adatu Modibbo-Kawu during a press briefing in Ilorin, “After listening to a presentation of the Hon. Commissioner for Works, including details of the tender process, Cabinet also approved the award of contract for the construction of a Flyover Bridge at Pipeline Road Junction, Tanke Tipper Garage. The contract was awarded to a prominent local contractor JMK Construction Company Limited, a sister company of Bulletin, for N2,272,899,200.00.

Besides the Kwara state government declaring the sisterhood of J.M.K Construction Company Limited and Bulletin Construction Company, a search with the Corporate Affairs Commission (CAC) showed that the two companies are located on the same address; No 7, Saadu Alanamu Street, G.R.A, Ilorin.

Failure of the Odili flyover, Port Harcourt sparked calls for the arrest of the builders, Bulletin Construction Company, and rekindled a national outrage that has haunted Mr. Odili’s post-office life, years after he was indicted for fraud by the Economic and Financial Crimes Commission.

Rt. Hon. Rotimi Amaechi who was the Governor of River state at the time of the bridge failure blamed the poor construction of the bridge on Bulletin Construction, noting there was a need to rebuild the embankment to the bridge, which the Governor eventually reconstructed using another contractor.

Reacting to the development, Former National President, Young Civil Engineers’ Forum (YCEF) Engr. Sowole Aliu Temitope noted that “It is the responsibility of the client (Kwara State Government in this case) to diligently carry out independent investigation on what the company she want to award a contract to has done in recent previously  and if it is similar to what it is being consider for award and the integrity of such works. Professionalism is very important and it must be guaranteed in whatever decision(s) the government will be taking.”

Sowole said “Bridge collapse is more disastrous than building collapse, hence the need for serious precautions before awarding such contract out to a Contractor. Not just to any contractor but the one with proven records of technical competency, financial prudence and integrity.

“That is because, in contracts award processes, there is a reason why it is always stated that any Contractor bidding for a contract should show proof of similar/capacity of works done in the past as being part of assessment in awarding the contract. That is the practice everywhere in the world”, he added.