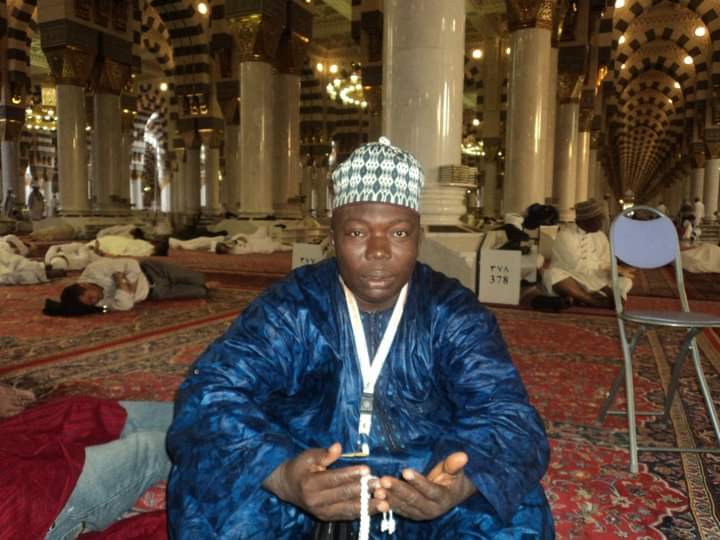 Over three (3) months after the purported appointment of Prof. Shehu Abdulraheem Adaramaja as the Executive Chairman of Kwara State Universal Basic Education Board, (KWASUBEB), he has continued to receive salaries from his former employer, the University of Ilorin, in a clear contravention of extant laws, Fresh Insight investigations have revealed.

Although, there was no official communication announcing Adaramaja’s appointment, the University of Ilorin Professor of Health Education has since resumed office and started work in earnest. Specifically, Prof. Adaramaja spoke publicly in the capacity of Chairman SUBEB, for the first time at a stakeholders’ meeting held in Ilorin on April 22, 2021, according to a press release signed by Yakub Ali-Agan, the Press Secretary, Ministry of Education and Human Capital Development. .

It would be recalled Fresh Insight had on February 26th, 2021 published an investigative report which exposed the unconstitutional operation of SUBEB without a duly constituted Board, thereby nullifying, according to the Kwara state Compulsory Free Universal Basic Education Law, 2005 as amended.

The law vested the power to carry out recruitment, appointment, promotion and discipline of teaching and non-teaching staff on salary grade level 07 and above in the ‘Board’, including the power to post and deploy staff, be it interstate, inter-local government and inter-service transfers.

It is also the exclusive preserve of ‘the Board’, to receive grant from the Universal Basic Education Commission (UBEC) and disburse same in accordance with agreed formula to the Local Government Education Authorities.

Furthermore, it is (the Board) that is also legally saddled with the responsibility of providing basic education facilities in the State, including physical structures.

While the Board Chairman is expected to be the Chief Executive and Accounting Officer of the Board, the Executive Secretary is supposed to be the Administrative Head. 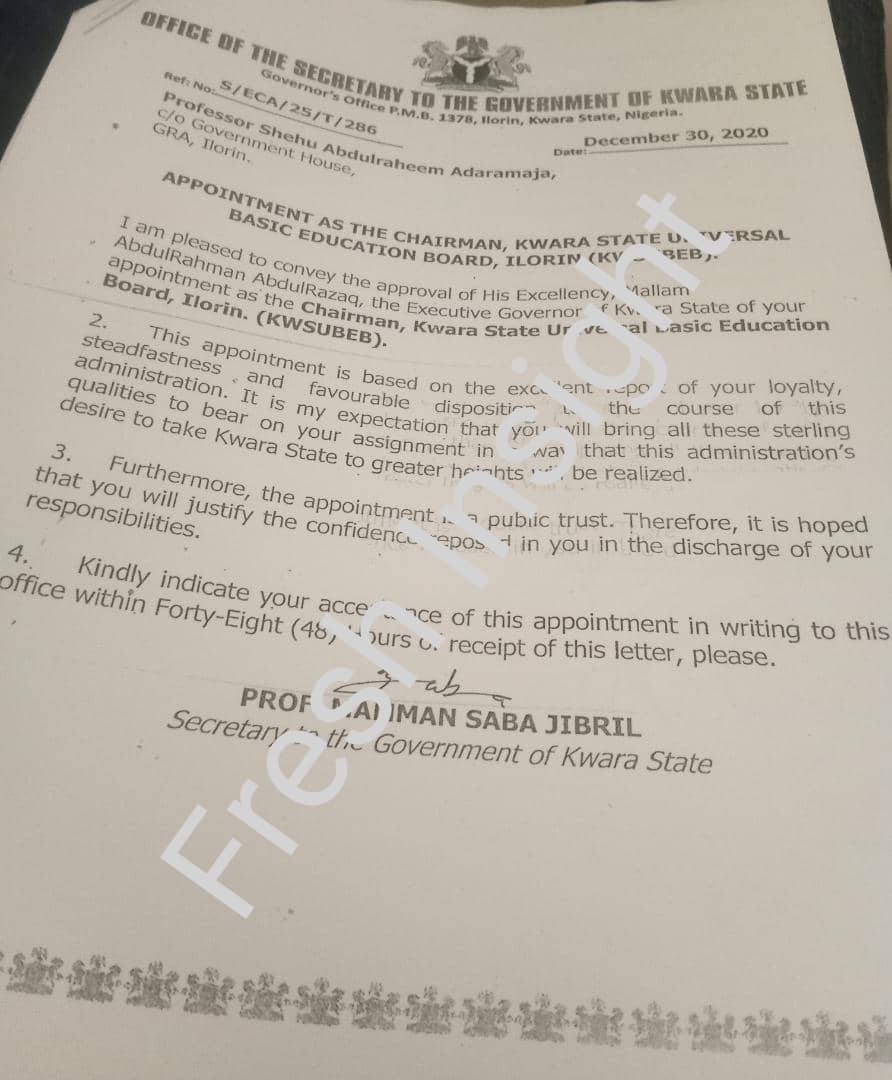 In raising a defence however, the Chief Press Secretary to the Governor, Rafiu Ajakaye in early March this year via a program aired on the state owned radio station, denied the contravention of extant laws, positing that the Board had been put in place since December 2020, stressing that the reason for not publicly announcing the appointment and constitution of the Board was to protect the Board from undue pressure from favour seekers in the ongoing SUBEB recruitment exercise.

Fresh Insight investigations however did not only confirm the defence to be an afterthought, it also confirmed it as an outright falsehood and an attempt to intentionally misinform and mislead the public with the aim of covering the illegal and unconstitutional actions.

Although, according to the appointment letter of Prof. Shehu Abdulraheem Adaramaja, with ref no; S/ECA/25/T/286, written by Secretary to the State Government, Prof. Mamman Saba Jibdil and exclusively obtained by this medium, he was appointed on 30th December, 2020

Background checks by Fresh Insight at the Secretary to the State Government’s office confirmed that Prof. Adaramaja only got his letter of appointment on 29th March, 2021, clearly three (3) months from the date contained on the letter and exactly 33 days after Fresh Insight’s publication exposing the illegality of the recruitment exercise and other activities of SUBEB, owing to the refusal of the Governor to constitute the Board, which is constitutionally empowered to carry out those functions.

Further investigations by Fresh Insight showed that after receiving his appointment letter on March 29th, 2021, Prof. Adaramaja wrote to his employer, the University of Ilorin in a letter dated April 2nd, 2021 titled APPLICATION FOR LEAVE OF ABSENCE. The letter reads; “Consequent upon my appointment as Executive Chairman, Kwara State Universal Basic Education Board, Ilorin by the Kwara State Government, I wish to request for a leave of absence to serve the tenure.

“The 2006 Act as amended that established the Board, stipulated a five (5) years tenure for the Chairman and his members. I promise to be a good Ambassador of the University throughout my tenure as the Chairman, KWASUBEB, Ilorin” it added.

The request was subsequently approved by the Registrar according to insider sources roughly two (2) weeks after the submission.

Fresh Insight’s further checks confirmed that Prof. Adaramaja received salaries for the month of January, February and March and part of April, 2021 as an employee of Unilorin via the Integrated Payroll and Personnel Information System (IPPIS) platform.

While he also received March 2021 salary as the KWASUBEB Chairman, even though he received his backdated letter just 2 days to the ending of the month.

Fresh Insight’s investigation into KWASUBEB exposed that as at the time of filing this report, the Kwara State Governor, has only appointed the Chairman of SUBEB, leaving Secretary and members of the Board not appointed.

Speaking with this medium on a condition of anonymity, a highly placed government source, while confirming Fresh Insight’s investigation said “As at this morning, we only have Chairman of SUBEB, without a Secretary or members of the Board, he is (Prof. Adaramaja) so to say a sole administrator of SUBEB for now” the source added.

This revelations runs contrary to the extant law governing the Board, which states categorically the functions and powers of the constituted Board which can’t be said to be activated by the Chairman without the full compliment of his members.

After 12 days of no response from the University of Ilorin, Fresh Insight again wrote a pre-legal-action notice dated 8th, May 2021 reminding Unilorin of our earlier letter and intimating the University of our readiness to approach the Court of law for redress, if our FOI request is not responded to within three (3) working days. 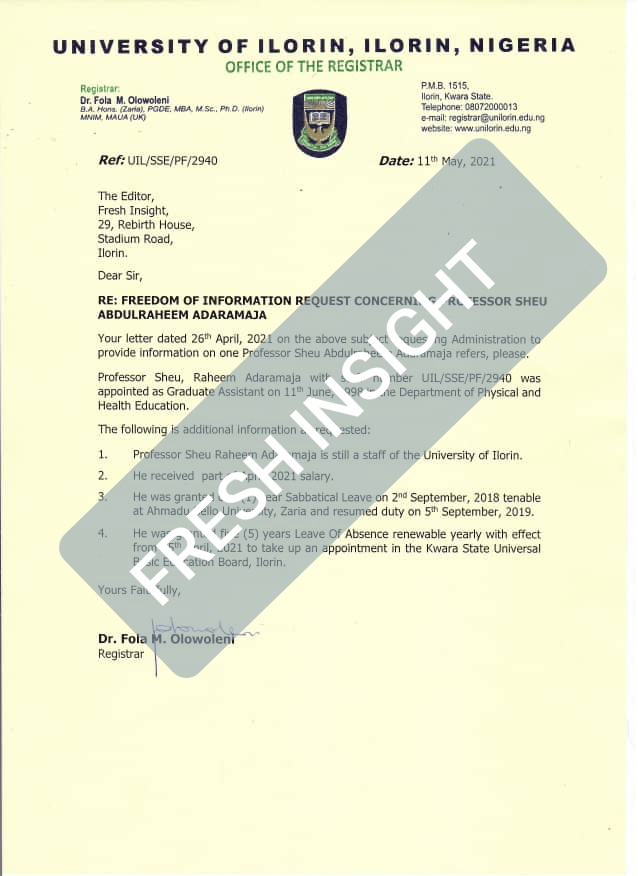 Few hours after the submission of the pre-legal-action notice, the University of Ilorin responded to Fresh Insight’s FOI request via our email. While confirming that Prof. Sheu Abdulraheem Adaramaja was actually on leave, the University also confirmed that he has been receiving salary running into millions of naira, 4 months after his purported appointment date.

“Your letter dated 26th April, 2021 on the above subject requesting Administration to provide information on one Professor Sheu Abdulraheem Adaramaja refers, please.

“Processor Sheu, Raheem Adaramaja with staff number UIL/SSE/PF/2940 was appointed as Graduate Assistant on 11th June, 1998 in the Department of Physical and Health Education.

“The following is additional information as requested:

1. Professor Sheu Raheem Adaramaja is still a staff of University of Ilorin.
2. He received part of April, 2021 salary.
3. He was granted one (1) year Sabbatical Leave on 2nd September, 2018 tenable at Ahmadu Bello University, Zaria and resumed duty on 5th September, 2019.
4. He was granted five (5) years Leave of Absence renewable yearly with effect from 15th April, 2021 to take up an appointment in the Kwara State Universal Basic Education Board, Ilorin.”

Deductible from Unilorin’s response number (2) , it confirmed that Prof. Sheu Abdulraheem Adaramaja received January, February, March and part of April salary, while according to the records he was also already drawing salary from the Kwara State Government as an appointee, as Chairman Kwara State University Basic Education Board (KWASUBEB).

Response 4 confirms that he (Prof. Adaramaja) was granted leave of absence on April 15th, yet he illegally resumed office almost 4 months if the defence of the Chief Press Secretary (CPS) Rafiu Ajakaye in reaction to Fresh Insight’s story, establishing the fact that the lack of constitution of the Board is an illegality and thus vitiates all activities of KWASUBEB not sanctioned by the Board.

Ajakaye said “The Board was constituted and they’ve resumed since December, there appointment was only not announced because of the ongoing recruitment exercise, which would have subjected them to intense pressure and lobbying if they were announced publicly” he confirmed.

This defence according to findings and the FOI response from Unilorin has been proved to be outrightly false.

Fresh Insight investigation also confirmed that Prof. Sheu Abdulraheem Adaramaja was appointed as Board Chairman without the government appointing Secretary and board members and thus makes all activities carried out by the non-properly constituted board is unknown to all relevant laws, especially the Kwara State University Basic Education law, 2016 as amended.

When Fresh Insight visited KWASUBEB on Tuesday, May 12, 2021 to seek audience of the Chairman for his reaction to the exposition, he wasn’t on seat.

In the same vein, numerous attempts made to get his reaction via phone was unsuccessful, as neither calls nor text messages was answered as at the time of filing this report.