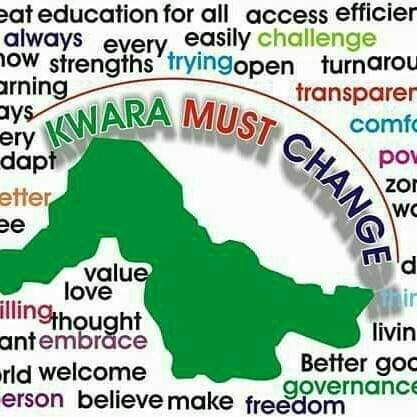 By  Comrade Abdul-Rahoof Bello
A former American President must have had the mischief makers of Kwara State in mind when he asserted that, “one can fool some of the people all of the time, and all of the people some of the time, but not all of the people all of the time.”  – Abraham Lincoln (1809-1865).
Nothing could be more apt to describe the nature and character of “Kwara Must  Change (KMC)”, which could be better described as a government parastatal but rather parading itself as a Non-governmental Organization (NGO) in Kwara State under the leadership of one Mall. Hamzat AbdulRasaq.
The KMC (hereinafter referred to as NGO) has been under close watch as a political group since inception of the present administration in Kwara State. Its modus operandi and nocturnal confraternity with the sitting Governor, have left no one in doubt that it is a pro-establishment political jobbers but disguising as a pro-democracy organization.
The Integrity Group is not unaware of the front line role played by KMC since the beginning of the self-inflicted crisis rocking the APC in Kwara State. The fake pro-democracy group has been dramatis personae with a finger in every pie of the crises on the side of Governor Abdulrahman AbdulRasaq Support Group (AASG).
It is still fresh in our memory that Mall. AbdulRasaq Hamzat the anchorman of KMC, had led a group of political thugs to attack the APC caretaker Chairman, Hon. Bashir Omolaja Bolarinwa at his residence. Investigations later proved that he was running the errand from the Government House.
Kwarans are living witnesses that KMC was never known to have ever issued a press statement nor addressed a press conference on any issue of general interest to kwarans, except when Governor Abdulrahaman Abdulrasaq selfish political ambition is at stake.
To blow off the lid on its hidden agenda was the  public presentation of a book titled “Legislative Watch, 2020”, purportedly containing  the performance reports of Kwara State, as well as National Assembly elected members.
Nothing could be more fraudulent and blackmailing in every material particular than the report. A careful perusal shows it is full of “lies, damned lies, and statistics”, with intent to cast aspersions and hatred on members of the Legislature. The intention is to deactivate and intimidate them to substitute their statutory independence for blind loyalty to the narrow political interest of an individual against the generality of the Party (APC).
Is it not absurd that an examiner has to rate/score students outside the scope of marking guide? If not for extraneous reasons, why would a structural engineer mark down for demolition, a building that passes structural validity? These and many more are the features of quackery job presented to the public to castigate the Kwara State 9th Assembly.
In view of this, the Integrity Group is convinced beyond reasonable doubts that the release of the “Legislative Watch” at this point in time, is a political bugaboo, meant to cause worries and raise unnecessary fears against the APC elected members. It is a diversionary tactics by the Governor to escape sanctions from the Legislature for anti-party and administrative recklessness. Therefore, the “Legislative Watch Report, 2020”, is the hand of Esau but the voice, that of Jacob!
To lend credence to this was the “official” submission of the report by KMC to Mall. Abubakar Samari, Chairman of GAA faction of APC, for onward transmission to Governor Abdulrahman AbdulRasaq as contract certification.
The Ulterior Motives
In a Machiavelli style, His Excellency needed to whip them to line by inciting the electorates against them through cheap blackmail so that they can continue to play along with him in his inordinate ambition.
Ordinarily, the APC Integrity Group should not have bordered about the shenanigans by Governor Abdulrahman AbdulRasaq to rubbish the elected Lawmakers and the intent to desecrate the hallowed chambers, considering the unconventional rapprochement between them and Governor Abdulrahman AbdulRasaq. Our legitimate refrain would have been “it serves them right”. However, we feel it would be politically unwise to have taken such stand in view of the impending collateral damage it would have on our party. We cannot afford to stand with hands akimbo watching two Biblical harlots digging their political graves in our domain.
Comrade Abdul-Rahoof Bello is the Director, Media & Publicity,
Kwara APC Integrity Group, he writes from Ilorin.
………………..CAVEAT…………………
OPINIONS EXPRESSED IN THIS ARTICLE DOES NOT REPRESENT THE EDITORIAL STAND OF FRESH INSIGHT IN ANY WAY OR FORM. IT IS THUS IN ITS ENTIRETY THAT OF THE WRITER